Friday Photo: The Palace of the Porphyrogennetos 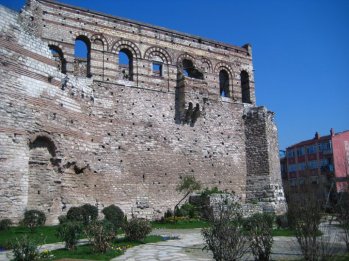 Given the subject of my Christmas post, it seemed appropriate to follow the theme of imperial dignity to Constantinople itself, capital of the East Roman (later Byzantine) Empire for nearly one thousand years. In this picture, you can see the remains of the ruined Palace of the Porphyrogennetos, which huddles next to the inner ring of the city’s land-walls. Although little remains of the palace today, traces of grandeur can be seen in the stone and brick coursework and the geometric patterning around the windows (each of which is unique).

More interesting than the physical presence of the palace, however, is its name–and the world of symbolic meaning behind it. Throughout its history, Byzantium was lead by a range of different imperial families, including the Komnenoi, the Palaiologoi, and others. In such a system, political legitimacy was a matter of what one made of it, and to this end, the concept of the porphyrogennetos was (quite literally) born.  It means ‘born in the purple’ and was applied to those not only of an imperial bloodline, but also born within the imperial palace. For these individuals, their right to rule was theoretically inalienable, sacred under God. This palace, then, demonstrates the confluence of religious, political, and even architectural themes in the creation of a Byzantine imperium.

One thought on “Friday Photo: The Palace of the Porphyrogennetos”