The White Sheep and the Black: Nomad Empires of Anatolia

For most of us, life is sedentary. We may commute between work and home, but that home is fixed firmly to the ground, giving us shelter. Instead of travelling between areas of natural abundance, too, we take advantage of a global supply chain which brings products from every season and climate straight to our doorstep. At the same time, though, the ease and comfort of our sedentary lives comes with risks–as the latest round of storms on the eastern seaboard of the United States chillingly demonstrates. 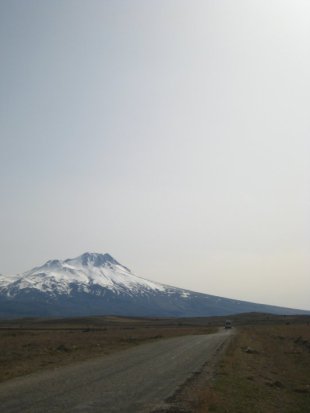 The wide spaces of central and eastern Anatolia facilitated the movement from winter to summer pasture.

It is because of this fragility in settled life that many people have, throughout human history, chosen to become nomads–migrating between seasonal pastures, keeping their wealth in herds, and trading for the settled goods unavailable on the steppe. These ways of life have been practiced across the breadth of Eurasia, but became increasingly influential in Anatolia (a traditional cross-roads of civilisations) from the 11th century to the 16th.

This was an era when nomads didn’t simply arrive on the scene of Byzantine decline; first as tribes, and then as confederations, these Turkic-speaking nomads aspired to create their own empires. And in some cases, they succeeded.

Byzantine experience with nomads was long-standing. During the war with Persia around the turn of the 7th century, they had relied upon the Gok Turk empire and its nomadic warriors to swing the balance of power in their favour. Later, they also experienced the penetrating raids of Arab forces into the Anatolian heartland.

In 1071, however, a new phase in the relationship between the Byzantines and the Turkic nomads opened. In this year, the Seljuk leader Alp Arslan delivered a humiliating defeat to the Emperor Romanos IV Diogenes. His victory opened eastern Asia Minor to subsequent Seljuk leaders, and laid the foundation for the Seljuk Sultanate (centred around Konya) encountered by the First Crusaders.

When they, too, suffered defeat at the hands of the Mongols in 1243, however, the region disintegrated into a patchwork of tribal principalities known as beyliks. These beyliks were Turkic-speaking, often ruled by a nomadic military elite, and included several now-forgotten kingdoms, like Karaman and Aydin, as well as that of Osman–founder of the Ottoman dynasty.

Among them, two different tribal groups–bitter rivals–gained control of eastern Anatolia, and even expanded into Iraq and Iran before their brief ascendancy was quashed between the Ottomans in the west and the Safavids in the East.

Sheep graze along the edge of Ihlara Valley, in Turkey. Livestock formed the nomads’ principal source of wealth.

The first were the Qara Qoyunlu (Black Sheep), a tribal confederation supposedly descended from Oghuz Khan–legendary ancestor of the Seljuks.  The Qara Qoyunlu ruled along their migratory routes between Erzerum in the north and Mosul in the south, and maintained a turbulent alliance with the Mamluk rulers of Egypt. Their neighbours were the Aq Qoyunlu (White Sheep), another tribal confederacy which clashed repeatedly with the Qara Qoyunlu over territory and influence. Sunni Muslims, the Aq Qoyounlu made strong allies with the Greek-speaking ‘Empire’ of Trebizond. 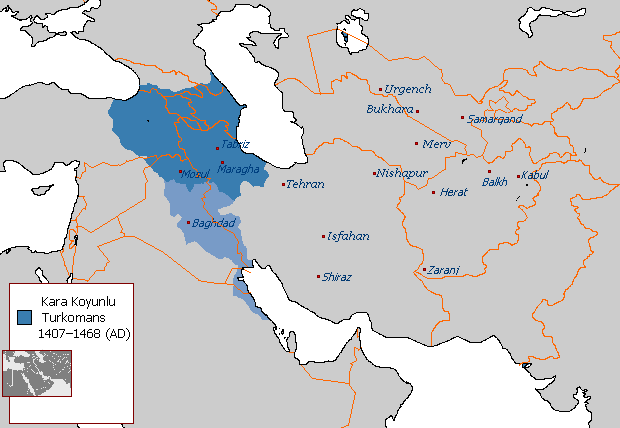 Both became embroiled in the great political struggles of their time, often suffering near-total reverses before their fortunes rebounded. The Qara Qoyunlu, for example, refused to submit to the conqueror Timur during his campaigns through the Middle East at the turn of the 15th century and were dispossessed of their lands. Less than 50 years later, however, Qara Qoyunlu forces had occupied Herat–a symbolic capital deep within the territory of Timur’s successors.

The Aq Qoyunlu Confederation at its greatest territorial extent. (Wikimedia)

Their rivals, too, experienced an unlikely resurgence. Although marginalised during the early half of the 15th century, the Aq Qoyunlu under their leader Uzun Hasan, decimated the forces of the Qara Qoyunlu leader Jahan Shah in 1467. They quickly took over Qara Qoyunlu lands in Anatolia and Iran, becoming so powerful that Venice sought an alliance with Uzun Hasan against the rising power of the Ottomans.

Despite the friction between the Aq Qoyunlu and the equally ambitious Ottomans, however, it was the Safavids who closed the book on this vast and short-lived tribal empire. Evolving from a religious order based in Ardabil, the Safavids levered their way into Aq Qoyunlu politics and swept their empire away in a surge of religious fervour.

Eastern Anatolia, which had nurtured the rise of the Qara Qoyunlu and the Aq Qoyunlu, subsequently became a no-man’s land between Ottoman and Safavid control. Nomads still dominated the landscape, but they proved a hindrance to the increasingly centralised states around them. In this way, the inception of the Safavid Empire in 1501 can be considered the end of an era in this part of Anatolia, which even today is at the periphery, rather than the centre, of the states that control it.

11 thoughts on “The White Sheep and the Black: Nomad Empires of Anatolia”