Hello all! I know it has been awhile since my last post, but that hasn’t stopped several more people from becoming followers! To give you a warm welcome, I would like to introduce you to something I have been meaning to have on the blog for a long time: a guest post. So sit back, relax, and enjoy as my good friend Andrew tells you about a seminar he attended this past week:

On May 29, I attended the University of Edinburgh’s 2013 Seventh Century Colloquium. One of the papers presented that impressed me the most was by Dr. Alex Woolf, of the University of St Andrews, entitled Sutton Hoo and Sweden, on the links between the famous ship burial of an Anglo-Saxon king in East Anglia, mediaeval Sweden, and Beowulf.

Excavators at Sutton Hoo in 1939, on the eve of WWI (Wikimedia)

Ever since Sutton Hoo’s discovery in 1939 the artefacts that were excavated have been analysed and linked in comparison with material found in Sweden, in particular a seventh-century ship burial at Vendel in Upper Uppsala, north of Stockholm. Whether the ‘Anglo-Saxon’ settlers of East Anglia were Swedes, or the descendants of them, the apparent similarities in the archaeological remains excited links with Beowulf, the hero of the Old English epic poem that takes his name. 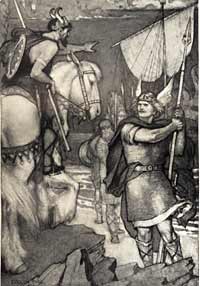 The allure of understanding archaeology through the lens of Beowulf has been a significant part of scholarship on Sutton Hoo (illustration by E. Paul, Wikimedia.)

In the poem, Beowulf belongs to a people called the Geats, whose location within the borders of modern Sweden has been taken as evidence of Beowulf’s own Swedish credentials. (For a map, click here.) Dr. Woolf effectively dispatched this attitude by drily noting that present-day southern Sweden, where the Geats are located in the poem, was not fully incorporated into a Swedish polity until 1658. Instead, the medieval Swedes were located much further north, in the area around Birka and modern-day Stockholm. Woolf also noted how even Vendel was marginal to this Swedish ‘core’. Indeed, Vendel was right on the edge between land that could be cultivated and the taiga where Sami hunter-gatherers lived. It was therefore a frontier community.

Having corrected the position of Vendel in the social and ethnic geography of the seventh-century, Dr. Woolf proceeded to outline a new linkage between the Swedish material and Sutton Hoo. Like Vendel, seventh-century East Anglia was a frontier zone, one where social hierarchies were beginning to emerge after a successful colonisation.

The famous Sutton Hoo helmet, proclaiming the high status and wealth of its wearer. (Wikimedia)

As many historians have observed, colonial societies are initially ‘flat’, stressing commonalities among colonists to aid group identity in the face of the ‘other’–the local populace. As the new population becomes settled, a more hierarchical leadership structure forms, and ‘kings’ emerge. These new hierarchies were vulnerable when such leaders died. The spectacular ship burials at both Sutton Hoo and Vendel were thus designed to foster the legitimacy of the dynasty at a time of crisis. These lavish burials were a sign of weakness and strength.

Woolf’s final thought was that Sutton Hoo and Vendel were, in fact, linked—not by Beowulf, but indirectly through cultural reflexes of a Greater ‘Danish’ culture that began to spread from England to Norway and Sweden in the sixth century. Perhaps the paper was more prosaic than Beowulf but a beautiful theory nonetheless.

2 thoughts on “Guest Post: From Sutton Hoo to Sweden”